Childhood immunization – inducing immunity by applying a vaccine – almost guarantees protection from many major diseases. Childhood vaccination prevents 2 million deaths per year worldwide and is widely consideredto be overwhelmingly good by the scientific community.   However, 2.5 million deaths a year continue to be caused by vaccine-preventable diseases, mainly in Africa and Asia among children less than 5 years old. 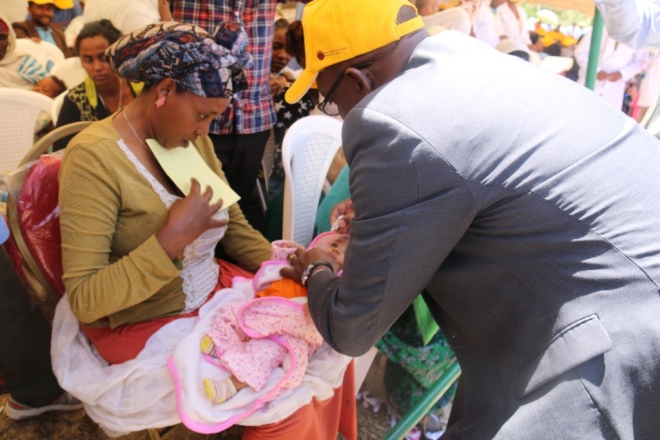 Parents’ knowledge about vaccinations is poor, and the knowledge they do have is often wrong. It appears that there is no association between parents’ knowledge and vaccination coverage rates, and the public seems to accept vaccinationdespite limited knowledge about it. One thing is clear, however: when parents resist vaccination, it is because they want to protect their children from harm. In 2003, political and religious leaders in three Nigerian states boycotted a WHO polio vaccination campaign, claiming that the vaccine caused sterility and AIDS. Similarly, certain Hindu and Muslim groups in India have long held the belief that vaccination is a covert method of family planning, primarily targeting Muslims. The greater acceptance of vaccination found among Javanese migrants as opposed to Acehnese villagersin the same area has been attributed to the former’s more positive cultural attitudes towards health. Both groups were found to have an equally poor understanding of vaccination and health in general. Similarly, followers of the Aga Khan in Pakistan were found to be receptive to ‘biomedical’ or ‘western’ medicine and reasoning despite the fact that as a group they were largely illiterate and understood little about vaccination. Cultural receptivity to perceived modernity and education, as well as trust in health workers, were considered to be the most important factors influencing attitudes. In short, knowing little about vaccination does not necessarily translate into negative attitudes towards it; factors such as trust (e.g. in health-care providers or ‘western’ medicine) and culture may be more influential. The impact of high levels of knowledge on subsequent attitudes towards vaccination is unknown.

The fundamental question is whether or not resources should be invested in improving parents’ knowledge of and attitudes towards vaccination. Although the evidence is unclear, it is commonly believed that strengthening advocacy, communication and social mobilization will enhance informed and willing participation in vaccination programs and that vaccination strategies are likely to be more successful if they are based on an understandingof sociocultural behavior.  Yet these approaches are not routinely incorporated into vaccination policy. Since factors influencing demand vary greatly by region and context, findings from one population cannot always be extrapolated to another. Thus, simple operational research into local knowledge and attitudes should become an essential part of every vaccination campaign. Current research into parents’ knowledge and attitudes towards childhood vaccination is disproportionately low considering the enormous scale and relevance of this issue. In order for such efforts to be successful, parents must be empowered to freely and clearly express their attitudes towards childhood vaccination.

In line with the principles and areas of work outlined in the Global Vaccine Action Plan and under the advice of both the Strategic Advisory Group of Experts (SAGE) on immunization and the Task Force on Immunization (TFI), WHO/AFRO is taking steps to address vaccine preventable diseases by implementing strategies for reaching all eligible persons with effective vaccines. One of the strategies is the implementation of the African Vaccination Week (AVW), which provides a platform for Member States to speak through one collective voice to advocate for immunization as a public health priority in the Region, and to achieve high immunization coverage. The overarching objective of the initiative is to target people with limited access to regular health services, thereby working to close the gaps in immunization.

The over-arching slogan of AVW is “Vaccinated communities, Healthy communities”. Each year, a suitable theme is chosen to reflect current regional priorities and the public health realities. The first AVW was celebrated in April 2011 under the theme “Put mothers and children first – Vaccinate and stop polio now”. That year, 40 countries in the Region organized activities to celebrate the event. In subsequent years, countries have continued to conduct vaccination campaigns, catch up vaccination activities, conduct health promotion activities, and provide other child survival interventions.

To explore the shape of one AVW in particular, in 2016 they worked under the theme of “Close the immunization gap. Stay polio free!” The kick-off occurred on April 24, 2016, the same day as the kick-off of the World Immunization Week (WIW) and vaccination week in the other 5 WHO regions. The celebration of that year’s AVW also coincided with the globally synchronized switch from trivalent oral polio vaccine (tOPV) to bivalent OPV (bOPV) occurring during the period from April 17 to May 1 2016. It also followed 2 important events that had taken place during the previous 6 months: Nigeria’s removal from the list of polio-endemic countries in September 2015 (highlighting the need for countries to stay vigilant in the fight against polio) and the first ever Ministerial Conference on Immunization in Africa (MCIA) held in February 2016 in Addis Ababa, Ethiopia. The Regional launch was held in Ganta, Nimba County, Liberia on April 25 2016 during a colorful function chaired by the Deputy Minister of Health Services in the presence of high-level officials and community leaders. The event was combined with the celebration of World Malaria Day and the introduction of 2 new vaccines (rotavirus vaccine in the entire country and human papilloma vaccine (HPV) as a demonstration project) into the national immunization schedule. The Ministry of Health with support from the Ministry of Education, UNICEF, and WHO conducted a national quiz on immunization; information on immunization was sent out to schools all over the country to equip students with knowledge prior to the quizzes that were held at district, regional, and national levels. The media were engaged to disseminate messages and information especially on polio, Hepatitis B vaccination, and the HPV vaccine. Increased advocacy for mothers to attend antenatal care and to deliver from health facilities was heightened. Mothers were also being tested for HIV to prevent mother-to-child transmission of HIV.

Integration of other interventions with immunization during AVW in the African Region is common and has shown potential for improving immunization coverage, as this dedicated period is used both for catch-up campaigns and periodic intensified routine immunization. While its impact may call for further examination, it is a potential platform for integrated delivery of health interventions to people with limited access to regular health service.